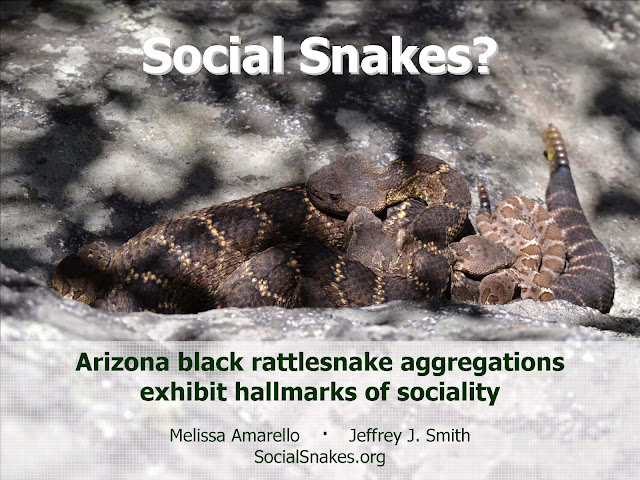 This summer we presented our preliminary findings on social snake behavior at the World Congress of Herpetology in Vancouver, British Columbia. Because our presentation was so well received (we won the Herpetologists’ League Graduate Research Award!), we decided to adapt it for the blog. Enjoy! And we’d love to hear your feedback below, by email, or on Facebook. 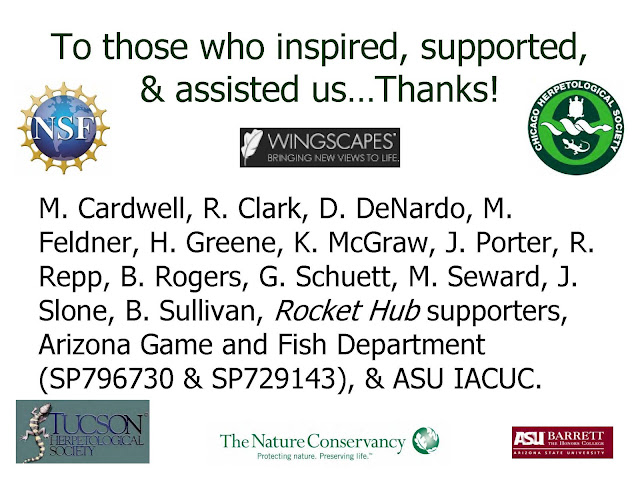 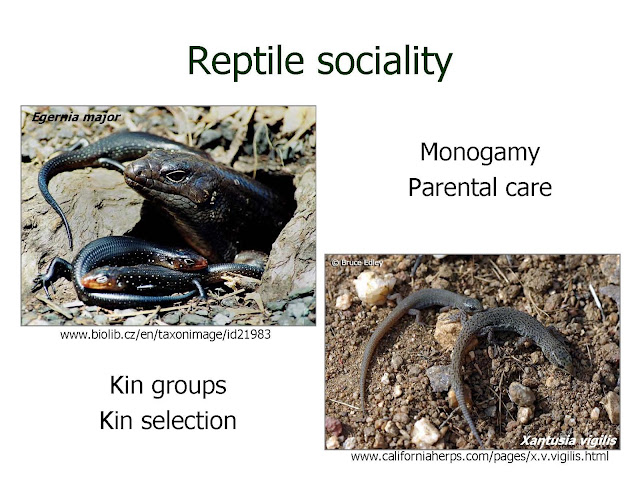 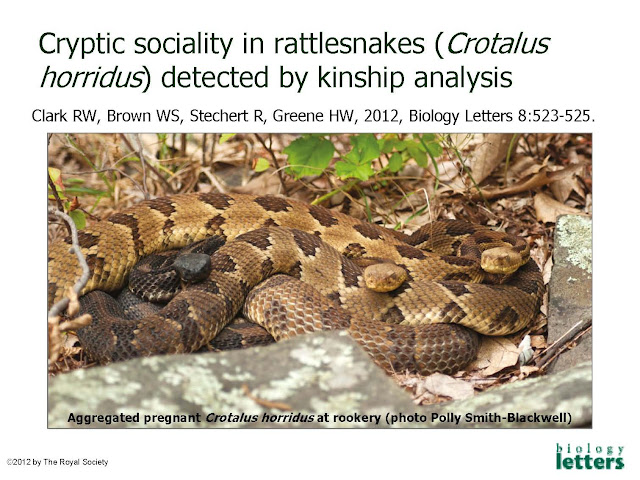 Recently, Dr. Rulon Clark and colleagues documented cryptic sociality in rattlesnakes: pregnant female and juvenile timber rattlesnakes tend to aggregate with their kin. You can download and read the full article here. 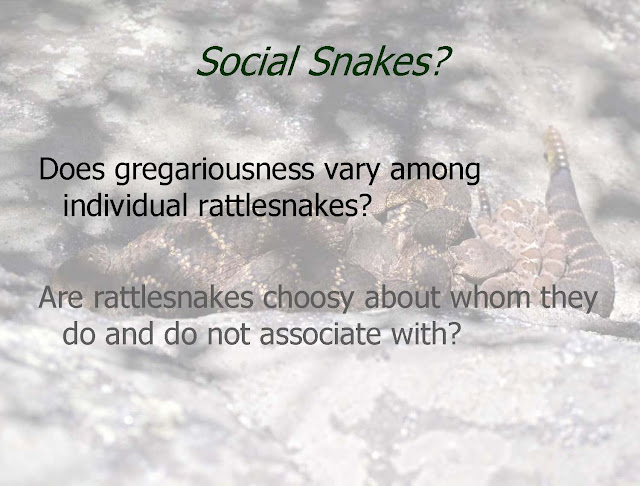 Gregariousness is an individual’s propensity to be social. 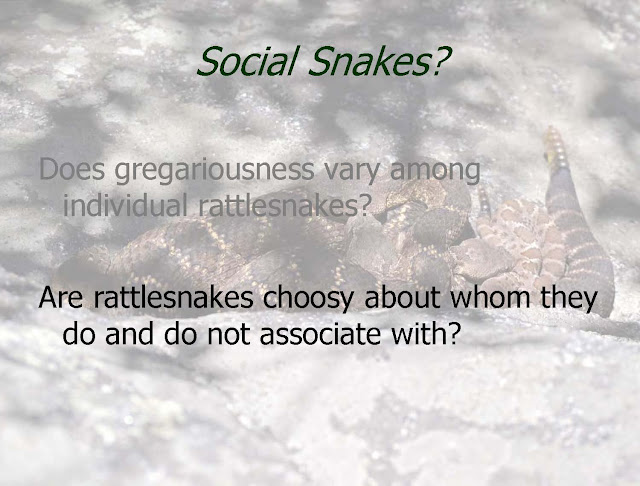 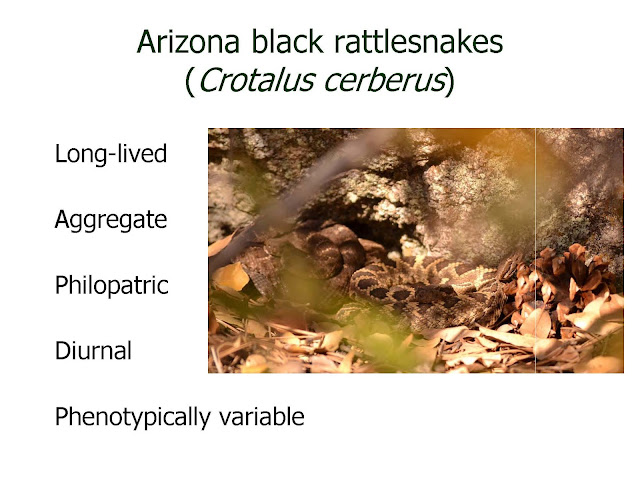 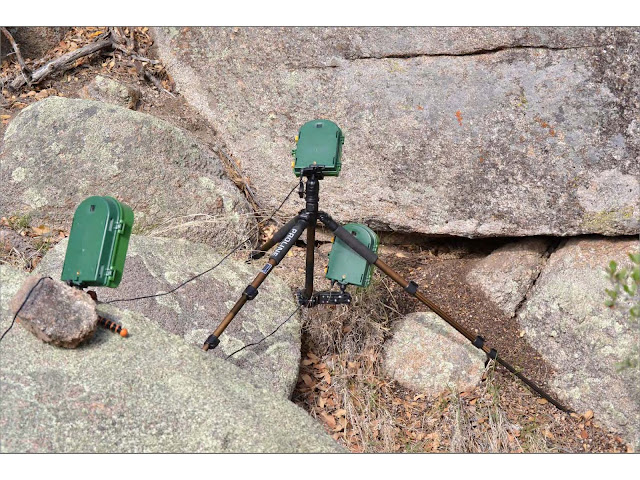 We used remote timelapse cameras (Wingscapes Timelapse PlantCam and TimelapseCam 8.0) to record behavior of rattlesnakes within aggregations. We set up 1–3 cameras at each basking site, and they took photographs every 30 s from ~8am–6pm. We stitched these photographs into videos, which were lumped into day-long sampling periods.

Here we present results from one basking site (more to come from two additional sites!) 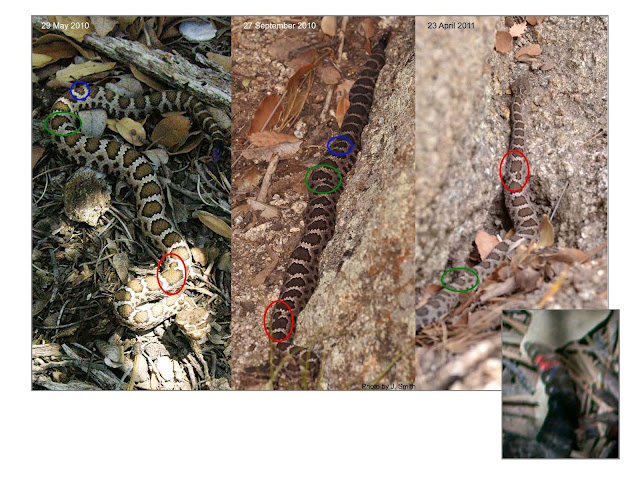 We primarily identified individual rattlesnakes using natural aberrancies in their dorsal patterns (see Zona’s story for more information). When we captured rattlesnakes away from aggregation sites, we painted their rattles, which both assisted in identification and validated the pattern method.

This is an example of what our data look like, for one site on one day. Rattlesnakes observed within a body length were defined as in association; thus for rattlesnakes to be considered in association, we had to observe them together at least once during a particular day. 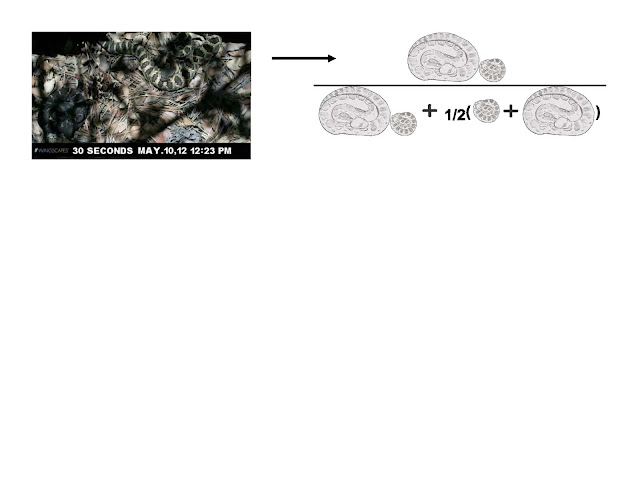 The next step was to take those observations of associated rattlesnakes and estimate the amount of time they spent together. 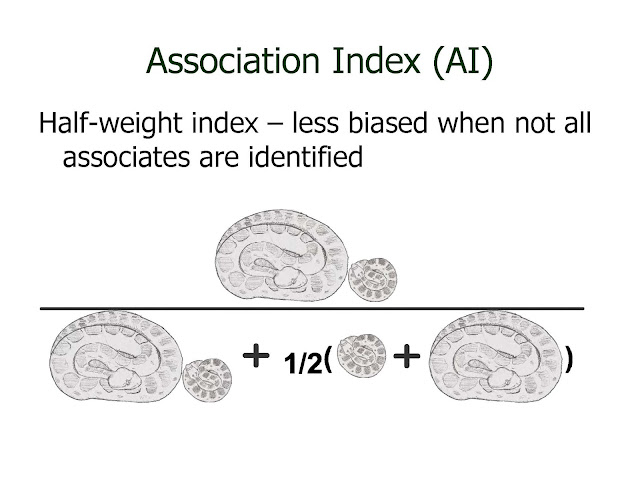 An association index (AI) estimates the amount of time each pair of rattlesnakes spent together. Because we were not always able to identify every individual in a group, we used the half-weight AI, which is less biased in these situations (Whitehead 2008, Cairns and Schwager 1987). The half-weight AI places more emphasis on the occasions when both animals are observed together than when one is observed without the other. 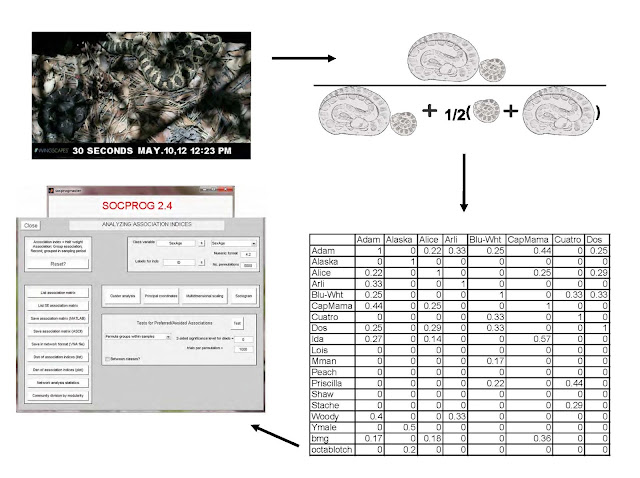 So now we have an estimate of the proportion of time each pair of rattlesnakes at this site spends together. We used the program SOCPROG to calculate AI’s and test our research questions. Because AI’s are not independent, SOCPROG implements a version of the permutation test developed by Manly (Bejder et al. 1998). This permutation test shuffled group membership within sampling periods (days) to produce a data set that represented what our data would have looked like if snakes were associating randomly. We then compared our observed data to the random data to see if rattlesnakes associated non-randomly. 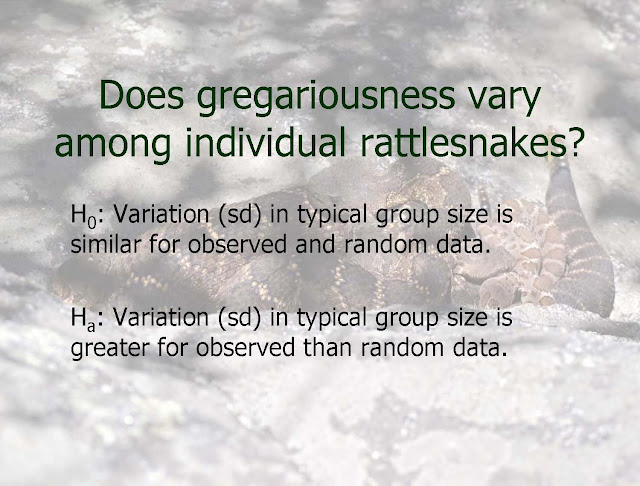 Our measure of gregariousness was typical group size, or the mean group size experienced by an individual rattlesnake (Jarman 1974). We looked for differences in variation in typical group size (standard deviation = sd) between observed and randomly permutated data generated in SOCPROG. 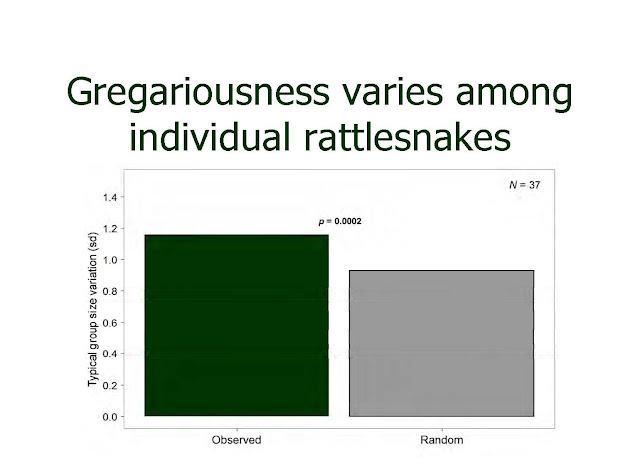 Gregariousness varied among individual rattlesnakes; some rattlesnakes preferred to be alone or in small groups, while others preferred large groups. 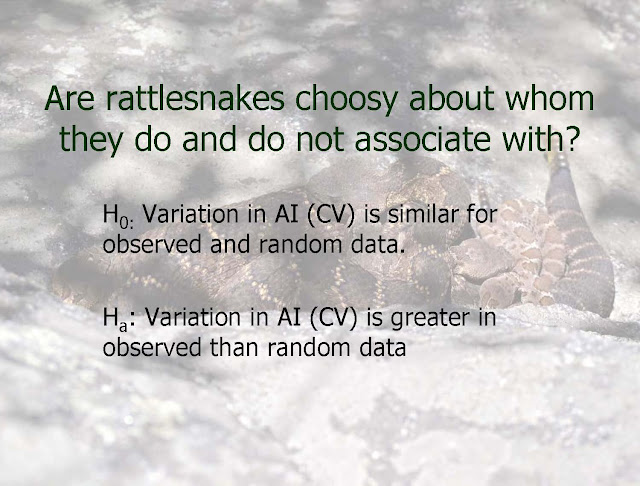 Again, we are looking at variation in AI’s between observed and random data. High variation in observed data, relative to random data, means that some pairs of rattlesnakes often associate (high AI) while others avoid each other (low AI). 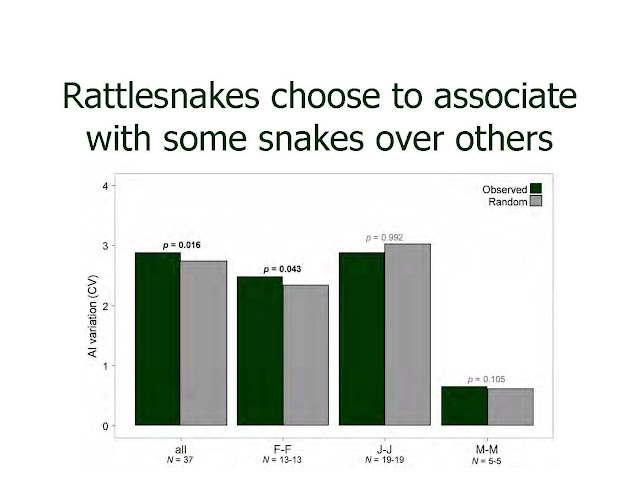 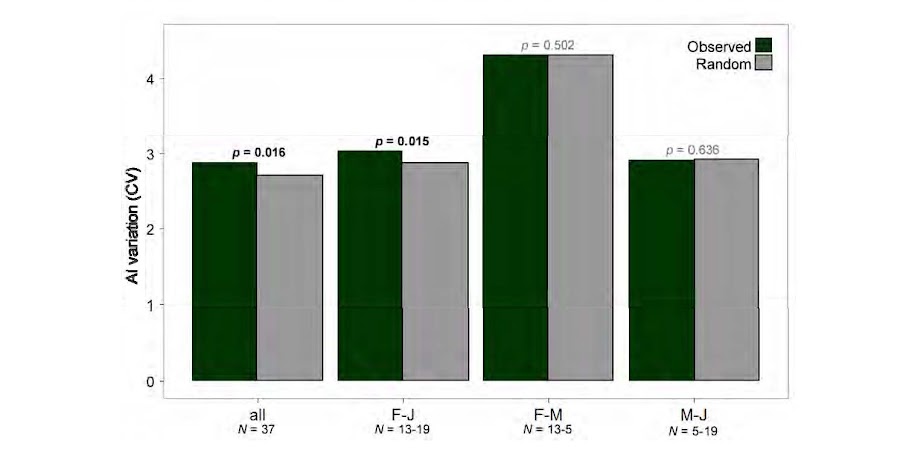 Rattlesnakes are choosy about whom they do and do not associate with. At this site, observed variation in AI was significantly greater than random data overall and among female-female and female-juvenile pairs. 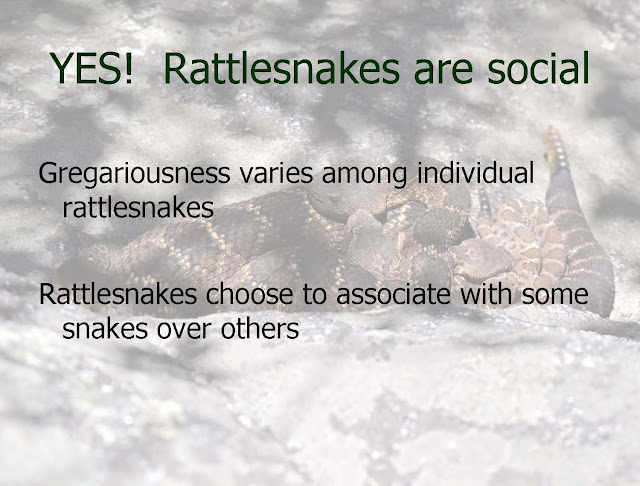 So YES – rattlesnakes are social. As mentioned above, we are currently analyzing data from two other basking sites and have a few more ideas to follow up this study: 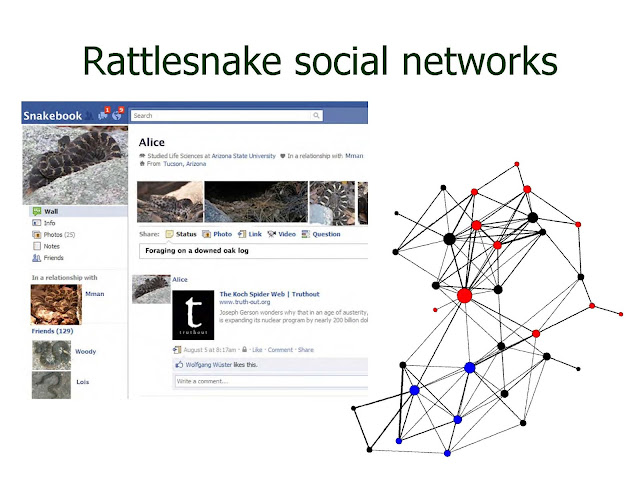 We plan to use social network analysis to describe this population of rattlesnakes, 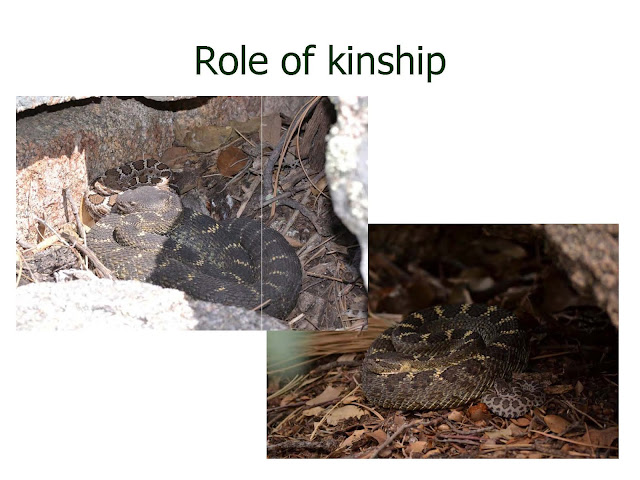 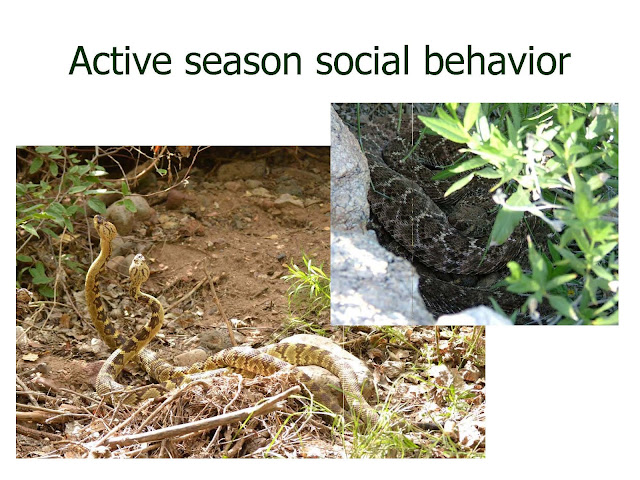 and because we restricted our analyses to associations between Arizona black rattlesnakes as they emerged from their dens, we’re interested in association patterns during the active season and in other rattlesnake species (left: black-tailed rattlesnakes in combat, Crotalus molossus; right: western diamond-backed rattlesnakes ‘stacking’, Crotalus atrox).

Our study describes social behavior in a ‘non-social’ species and may provide information on the evolution of sociality. But more importantly, our findings have the potential to impact conservation of an entire group of misunderstood and often maligned organisms. Humans have an innate fascination with snakes (Burghardt et al. 2009), but unfortunately, this keen emotional response is often appropriated by fear. Pernicious myths and popular media that have long portrayed snakes as malicious villains instill and nurture fear of snakes, which has led to widespread persecution and obstruction to conservation efforts (Seigel and Mullin 2009). In contrast to how snakes are usually seen in the media, recent research on rattlesnakes reveal behaviors that appeal to the general public: parental care (Greene et al. 2002, Amarello et al. 2011), cooperation, and social interactions (Clark et al. 2012, this study). By revealing the social nature of snakes, we are starting to change the public’s perception of snakes from ‘cold-blooded killer’ to social creatures with complex family lives and make a positive impact on their conservation.

Chapple, D. G. 2003. Ecology, life-history, and behavior in the Australian Scincid genus Egernia, with comments on the evolution of complex sociality in lizards. Herpetological Monographs 17:145-180.

McAlpin, S., P. Duckett and A. Stow. 2011. Lizards cooperatively tunnel to construct a long-term home for family members. PLoS ONE 6.