We got a beautiful thunderstorm yesterday afternoon. It rolled in at the perfect time: late enough to cool things off, but early enough that it was still a little light after. It was time to take an after-dinner stroll around headquarters to look for old friends.

Removing transmitters from snakes is bittersweet. No doubt the snakes are better off without them and we’re happy to give them a break from our constant visits. But we get attached to snakes we follow with radio telemetry and without transmitters we can’t be sure we’ll see them again and know how they’re doing.

We removed transmitters from five snakes last summer and have already seen a couple of them again (Henry and Boyett). Glendy (male Arizona black rattlesnake) was the skinniest of the bunch, so he’s the one I’ve wanted to see the most to know he’s doing OK. Although Glendy spent some time around the barn last summer, we’ve yet to run into him this year.

So Glendy was on my mind last night as I started my post-storm walk. After looking for Cat where I last tracked her (not to be seen), I walked along the fence, which is always a good spot for snakes. And there, next to a large piece of tin, was a familiar black disc that always makes my heart skip a beat – a coiled up Arizona black rattlesnake.

I circled the snake, taking photos from all different angles, hoping to see a painted rattle or familiar pattern.

And there it was: 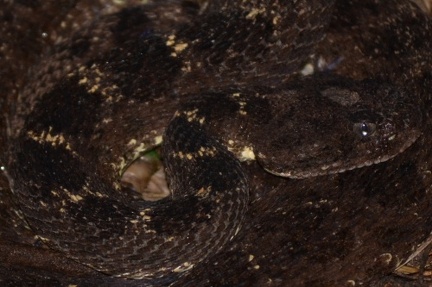 Through the magic of digital photography, I was just able to make out a little green on the rattle.

Here was Glendy, looking good, still damp from the storm and probably happy to have had a drink from the rain. Maybe he remembers me or perhaps he’s tolerant of all humans, but he never stirred despite my close approach and the repeated flash of my camera.

Through telemetry we got to know Glendy’s habits and haunts, and developed a fondness for him. This brief, chance encounter is not only rewarding (he’s alive! he’s healthy!), but provides valuable data without having to disturb him with more than a flash of light. Although we won’t know where Glendy goes, we’ll be keeping an eye out for him next time.

I bid my old friend farewell and smiled all the way back to the house.