A proposal to ban gassing in Texas (one of the few states where it is still legal) was introduced in late 2014 and has been debated ever since. Pouring gas into the ground to collect wildlife probably seems a little crazy and hardly controversial, but rattlesnake roundups depend on this method of take. Roundup proponents have estimated that 80% of the snakes at roundups are collected by gassing and it is difficult to imagine how a single roundup (Sweetwater) could have captured more than 21,000 rattlesnakes in 2016 without using gas. So roundup proponents and those who benefit financially from these events are fighting the gas ban. 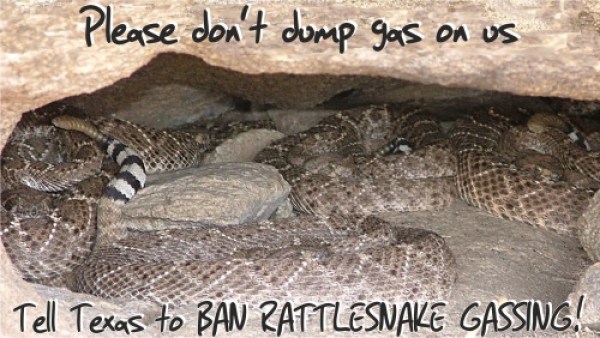 On May 25 2016 the Texas Parks and Wildlife Department (TPWD) Commission discussed this issue at their quarterly meeting. The Commission requested that TPWD prepare a new rule regulating gassing to present at their November 2016 meeting. If a ban is proposed at that time, there will likely be a public comment and waiting period before the rule goes into effect. The fight isn’t over, but this is positive news.

There is no direct action to take right now to address the gas ban, but we’ll let you know as soon as action is needed on this issue.

Sign our petition to Stop Snake Slaughter at Rattlesnake Roundups.

Support and learn more about the feature-length documentary, Rounding Up Sweetwater.